My marathon aspirations started several months before the race.  About eight years ago I started doing triathlons, sprint distance followed by Olympic distance races.  I enjoy the cross training and the community.  I got my older brother into racing and he took off with it.  He did ½ Ironman races and ran a marathon.  I never thought I could run a marathon because I didn’t love running, had no time to train and wasn’t sure I was built for real endurance.  Also, running for four plus hours seemed like it would be the most boring thing in the world.  But I wanted to see if I had the mental and physical attributes to really push myself.  So I entered the lottery for the NYC Marathon, truthfully thinking no one really gets in via the lottery.  But, low and behold, the email congratulating my entry in the race for 2018 arrived in my inbox.  It was game on!

One of my medical school buddies, Dr. Ari Perkins, decided he would train for the marathon as well.  In July, I started the Hal Higdon Marathon Training: Novice 2 program, https://www.halhigdon.com/training-programs/marathon-training/novice-2-marathon/.  Having a structured plan was invaluable to me.  With a demanding schedule, I was able to figure out how to get all the runs in and cross train with swimming, biking, hot yoga and hiking.   It did require several runs starting in the dark with reflective clothing and a head lamp, and a few 8 mile runs on the treadmill that seemed longer than 12 mile runs outside, but I got them in.   Since I’d not run more than 8 miles before this training, I felt very accomplished after every long run.  It was like winning a race each week.   Ari and I would text each other screen shots of our runs, which helped keep both of us motivated.  My buddy, Keith, who’d done a few marathons before, ran with me often, which helped break the monotony of running.  When solo, I often listened to downloaded books and the miles would float away.

The logistics for the NYC Marathon can be a challenge.  I stayed in the city Saturday night and in the morning took a subway downtown and was herded onto a ferry to Staten Island.  After a pretty long wait on a bus, we drove to Race Village where you go to your corral, try to stay warm, and hit the porta potty.  For me there wasn’t a lot of time.  I stretched and was then grouped into Blue Wave Three and walked to starting line.  I ditched my extra layers in a donation bin and then after a few announcements a canon went off and thousands of us in wave three, were running.

The race was spectacular to say the least.  I was amazed at the number of people running and even more amazed at the number of people watching.  The spectators, numbering 2 million in all, come from all over the world https://www.forbes.com/sites/kurtbadenhausen/2015/11/01/new-york-city-marathon-by-the-numbers/#59d7ff2a6821.  People are cheering in all different languages and from different walks of life, it’s a truly a melting pot.

I was surprised that the run never thinned out.  I was packed with other racers the entire time.  The first 15 miles are mostly level, so I felt pretty good and saw the 4 hour pacer most of the time.  But then you hit the 59th Street Bridge, which is a big long uphill that drops you on 1st avenue, which is a bigger and longer uphill.  I felt like the rest of the race was uphill.  My legs felt pretty good, but at about mile 20 I was getting really thirsty and kept hoping the water station was arriving soon.

I found it interesting that I felt as if I was really moving at mile 22, but my watch told me my pace was one minute longer than it had beewn at mile five.  When I crossed the finish line and stopped running, my legs felt as if I were on a boat.  A few racers dropped to ground holding their calves screaming as their muscles were in spasm and some were crying, but most people were just slowly walking to the exit.  I was herded uptown to get a poncho and some water.  After two bottles of water, I felt pretty good and happy to meet my family and friends.

FAMILY!  I can’t stress enough how great it was for me to be able to break the race up into sections when I would see my family.  Being able to high five my kids a few time during the race really kept me going.  My Dad and Stepmom dragged them all over the boroughs to see me at different points in the race.  My father fashioned prayer flags from Nepal to tent poles so I could spot them a few blocks away.  My brother’s family and my Mom were at yet another spot which gave me a spread.  If you are planning to run a marathon I highly encourage family involvement.

I really feel lucky to have completed the NYC Marathon.  From the application, training, finishing to now, it is truly a life changing experience.  What we are able to train our minds and bodies to do still amazes me.

Happy training and be safe. 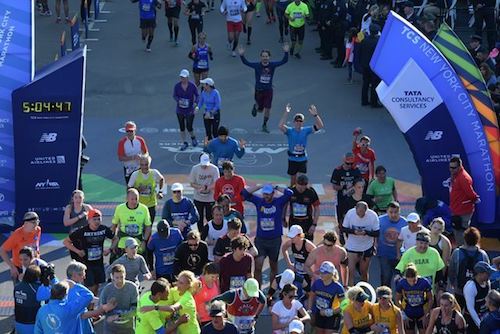 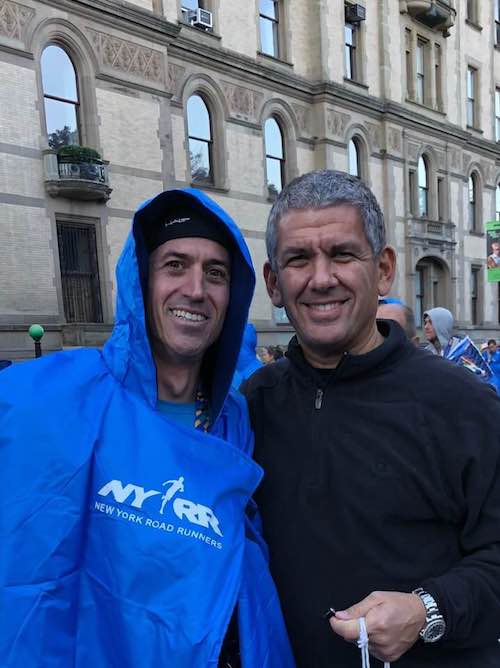